The Yu-Gi-Oh! Card that Never Was

Yu-Gi-Oh! is a trading card game that ties into an anime series of the same name, and is one of the top three TCGs in the world, alongside Pokemon and Magic: The Gathering. Like those games, a new booster pack series is released roughly once every three months, adding around 100 new cards into the game. The game is primarily developed in Japan, and so they receive the sets first, normally a few months in advance. This first release in Asian regions (where the game is referred to as the “Official Trading Card Game”, or “OCG”) gives players in western areas (the “Trading Card Game”, or “TCG”) an insight into what cards are coming out and how they will shape tournament play in the future. However, there are some key differences between the two - they maintain separate banlists, and each set that releases in the TCG comes with around 10 additional TCG exclusive cards that have not been seen before in Japan. This story centres around a series of TCG exclusive cards, leaks, and some crazy price hiking.

The story begins in August 2014, just before the release of the set Duelist Alliance. This was the first set tying into a new anime series, which brought about a lot of changes. A whole new game mechanic was being introduced, and we already knew from the 4 months the set had been in Japan that it was about to introduce two powerful new deck archetypes that would become immediate contenders with the existing metagame.

Prior to Duelist Alliance, the 10 TCG exclusive cards in a set had typically been a mixture of an extra card or two to supplement cards in the main set, and completely new and distinct cards with no connection to any others. Starting with Duelist Alliance, however, Konami decided to mix it up and instead use the slots to form entirely new deck types. As a result of this, 5 of the 10 TCG exclusive slots in the set were cards for the new Burning Abyss archetype, a series of cards based on the 14-century poem Dante’s Inferno.

Despite only being 5 cards, the resultant decks that formed around them were decently powerful. They meshed well with some existing cards to pad the numbers, and their ace card based on Dante himself tied the whole thing together to form a very resilient core. That card was also at the highest rarity - Secret Rare - which meant it was not particularly easy to get the three copies needed for the deck to work. This was a common practice by Konami, and the demand coupled with the smaller supply lead to prices for individual copies of Dante to rise on the secondary market. As people started to catch on to the deck being a serious contender, Dante’s prices slowly rose to the $30-$40 mark. The deck was not dominating tournaments against the other new decks introduced in the set - Shaddoll and Satellarknights - but even being able to trade evenly with despite having a card pool of only 5 cards was enough to turn heads. Players waited in anticipation for what the next set would bring for Burning Abyss.

This next set, The New Challengers, was due for release in the TCG regions on November 6th 2014. The set had released in July in the OCG, so we already knew that both Shaddolls and Satellarknights were getting some interesting new cards, as well as the introduction of yet another top-tier deck in Qliphorts, that utilised the new summoning mechanic. Being TCG exclusive, however, the new cards that Burning Abyss would receive remained unknown, until Konami themselves would publish an article on them a couple of weeks before the sets release.

That was the plan, at least. On September 14th, a Japanese Twitter account leaked a picture of an uncut sheet from within the factory with some of the sets TCG exclusive cards on it. With this leak, we got our first look at Virgil, a Burning Abyss Synchro monster. The effect of the card was translated, and players generally determined that it was decent, if not earth-shattering. In order to play Synchro monsters, however, a special subclass of card called “Tuners” must be used. The way the Burning Abyss cards worked meant it’d be very difficult to use any existing Tuner monsters with them, which could only mean that the upcoming set must also include a specific Tuner for Burning Abyss. The viability of Virgil would largely depend on what this card did. As luck would have it, the leaks included this card too! Our first look at the Burning Abyss tuner, Rubic, looked like this: 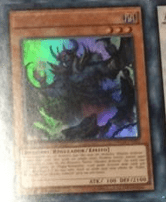 The leaked image of the Burning Abyss tuner.

This image is of course illegible, and so players left disappointed that we wouldn’t know what the card did until the set’s release. Except of course not, because 5 days after the leaks were originally posted, a user on the DuelistGroundz forums where the leaks were being discussed returned with some news. They had supposedly worked with a Portuguese translator and “magnified the card a thousand times in Photoshop and worked on it for an hour and a half” to decipher these hieroglyphs, and were here to share the results of their findings, the effect of this new Tuner monster. Digging this up again in 2020 took me a surprising amount of time, so I’m going to post it here in full to save others the effort.

● If you control no Spell/Trap Cards: You can Special Summon this card from your hand.

● If this card is sent to the Graveyard: You can Special Summon it.

This effect is absurdly good. It makes the mere act of summoning Virgil advantageous, since it grants you additional cards to continue making plays afterwards. Users on the forum immediately joked about the legitimacy of this effect, but it didn’t take long for this to spread across the internet. Once the effect started getting picked up by major Yu-Gi-Oh news sites, being posted to other forums and Reddit, the wider playerbase started to take notice. With this new card, Burning Abyss could be in a position to be the best deck in the game. This new found attention caused many players to start scrambling to build the deck, and to do that they needed three copies of Dante, the Secret Rare card from the Duelist Alliance. This caused the secondary market price on Dante, an already expensive card, to skyrocket. Archives of yugiohprices.com show the average price of a single copy rose to $92, with the highest prices topping three digits at roughly $120. This had knock-on effects for anything else the deck ran, and even the cards that countered these demons.

The problem was that this effect was never real. It took over a month, but eventually Konami started to publish their preview articles for the TCG release of The New Challengers, and we got an article that showed us the real effect of Rubic for the first time. In comparison, it was remarkably lacklustre. Gone were the two parts of the leaked effect that made it good - the card draw and the recursion engine. In fact, Rubic didn’t really do anything - it exists purely as a means to play Virgil. In the span of a month, the card had gone from being the star of the show to merely a supporting act for the upcoming rock star. The forum user immediately started to backpedal, attempting to explain their translation process and how they could have been mistaken. Some users were lamenting Dante’s price hike, while others wished that the original leaker had just realised the importance of Rubic and gotten a clearer picture of that instead. Dante’s price began to decline, though it never returned to its pre-leak levels. The damage had been done, pricing many players out of the deck for the foreseeable future.

While not as impactful as the cards in Duelist Alliance, Virgil, Rubic and the other Burning Abyss cards released in The New Challengers ultimately helped keep the deck afloat in the top tiers. Dante’s exclusivity meant it remained expensive during this time, and the next two sets continued this trend - less impactful but ultimately useful cards to help give Burning Abyss more options and keep going. None of these other cards were ever leaked in the same fashion.

The deck has since then remained remarkably resilient, being relevant for many years since its original incarnation. With the help of two additional cards to prop it back, one in 2016 and one in 2019, the deck has gone on to top and win many of the highest level events since its original incarnation, most recently taking second place at YCS Utrecht in February 2020. For a game with such extreme powercreep, Burning Abyss has been one of the only decks to keep going year after year. By comparison, its competitors in 2014-2015 - Shaddolls, Satallerknights, and Qliphort - have all but been forgotten about. Unfortunately, while Virgil was a useful tool at its release against those decks, nowadays it is excluded from decklists, in part due to the requirement of needing to run the underwhelming do-nothing Tuner, Rubic.