I got a lot of music tech sitting around my house that gets switched in and out of my rig willy nilly - or used piecemeal - that could use a little TLC to make them work together better or be even more fun. A lot of these things exist already, but where’s the fun in buying something when you can buy a bunch of pieces/parts and MAKE something?

Many guitar pedals have support for Phono/TRS connectors to activate alternative switches (Like the BOSS RS20xl looper pedal), but others have midi-in (like the Digitech Whammy), so to be capable of midi-thru and to output control signals to TRS connectors that will send the apropriate momentary/toggle signals would be able to control a larger amount of pedals in a smaller ammount of space. Boards like the Teensy are small enough to fit in most enclosures, but adding 2 midi jacks and access to the USB jack and a bunch of plugs can get pretty big pretty fast - it’s possible to use RCA connectors instead of PHONO, and suppliers like Mouser offer board-mountable banks of plugs. One way to minimize enclosure size would be to deliver MIDI over a TRS connector, but this requires specialized wires with a different connector on each end, but these can be made at home realatively easily - One short midi connectors will allow you to create 2 such cables when you attach 2 TRS plugs..

The MIDI Buddy is a discontinued MIDI foot controller designed to send MIDI program change on any of the 16 MIDI channels, or MIDI song select with start and stop buttons. The MIDIBUDDY also features MIDI sharing and operates via MIDI phantom power, which eliminates the need for the irritating “wall-wart” power supply. The MIDIBUDDY’s phantom midi power uses pin 3 to carry a 9-15v power source, and pin 1 for ground (leaving pins 4 & 5 to handle midi signals & pin 2 to be the ground for that connection).

Modernizing the internals isn’t a new idea, somebody already has a drop-in MIDIBUDDY replacement controller that will enable the board to send more than program-change messages; but there’s plenty of space in the MIDIBUDDY enclosure to put a RasPi or other computer that can do more advanced things including synthesis and other controls. MIDIBUDDY’s metal enclosure would block WIFI signals so there will have to be a way to talk to the device either through a cable or external antennae.

If I’ve got a midiBuddy with a RasPi in it, there’s no sense not trying to do a little more with it than midi signaling - The “Gold Standard” as far as I can tell is Pi-Fx, the RasPi-based pedal board running Guitarix, my worry with this is the latency is around 5ms with overclocking an “a proper power supply” which might eat into portability (but the 5ms latency on that still beats the pants off androids 20ms, and 10ms is allegedly “playable” for musicians). The Pi-FX page mentions PureData (which I loved around 2005) & the Pedal-Pi - both of these projects rely on a linux installation, so they’ll be easy to use. The Pi-FX originally used the vintage Computer Keyboard Foot Pedals Hack but eventually switched to using GPIO ala Adafruit’s RetroGame utility. but I’m not certain about how that would work with a PiSound or other Raspi hats.

The RasPi could probably be replaced with the Spin FV-1 IC - a dedicated DSP solution with it’s own Assembly language for making reverbs, etc - there’s a lot of boutique pedals using this… yeah, the boutique market went digital - amazing… Hacking FV-1 pedals

Like the above MIDIBUDDY idea, there seems to be plenty of room inside of a Bliptronics 5000 device to fit a RasPi Zero, with the added bonus that the plastic casing doesn’t block wifi signals - the internal design of the Bliptronics 5000 had already been modified to behave as a Monome (a similar device that is a controller instead of a synth) - the existing Bliptronome project uses a custom circuit board modeled on the Arduino - but the modular nature of the Bliptronics 5000’s brains and button controllers gives an 18-pin header to interface with the buttons - unfortunately the 4 control knobs are attached to the brain board, so a separate interace will have to be made to replace that functionality (since the bliptronome boards are out of print, and there’s no design files available online to recreate them.)

At the moment I’m thinking of the classic Moog Taurus 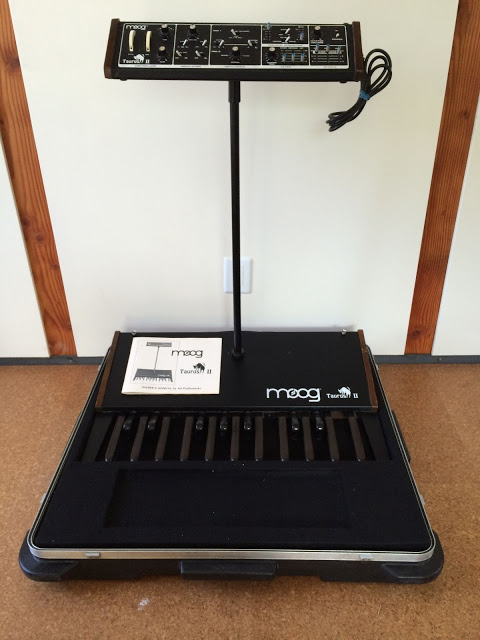 remote control, with the Bliptronome on a stand hovering above the midiBuddy, but I like the idea of mounting things directly to a guitar ala DEVO 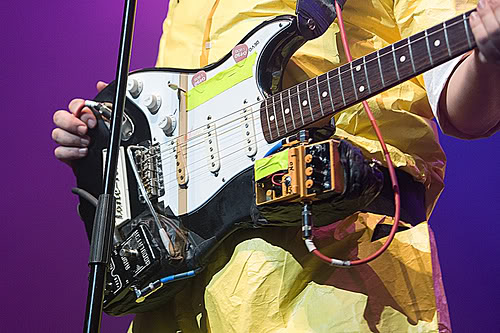 - there are existing solutions for adding midi controls to acoustic guitars and a research paper on turning anything into a touchscreen with chalkboard paint, but I don’t think I want to reverse engineer researchers who aren’t sharing their code, I don’t have that PHD-Student level of free time. No matter what I do, it’s probably going to wind up a lot easier to transport than building a Eurorack

I’ve got an old busted wheeled toolbox that would make an excellent storage/transportation solution for playing music on the street, it’s a decent size to work as a chair as well - but it can also be a cajon - the lid’s broken to make its handle useless but maybe I can glue that down or get a replacement lid? My “Big Idea” is to affix a snare inside and get 2 pedals for the outside to function as the beater to the kick and snare sounds. My big project on this will be the creation of a low-boy (think hi-hat, but not so hi up) - but I’d like to be able to get it to make the sound of the pedal being opened and closed as well as the sound of the stick hitting it. Since one (or 2) feet will be occupied by the kick/snare, I’d like to make a dual-action foot pedal. I’ve seen a few solutions and I’ve been looking at patents online to find others, I’m not quite satisfied with any of them but I’m not quite up-to-snuff with CAD to actually simulate anything so I’ve got a pad of doodles and some ideas of stuff at the Hardware store to buy.

If the drums were electric it would be much simpler to build, but wouldn’t be as entertaining to watch tapping drum-synth keys (or using piezos embedded in shoes as drum-triggers)

I’ve got a microKorg & a small guitar, there’s gotta be a way to attach these devices, I think I can build an extended back-panel or breakout board for the back of the korg through a guitar to give places to connect all the wires - the Korg operates on batteries and I have a guitar amp that does as well, I’d have to find some sort of pre-amp and mixer to live inside the hybrid synth/guitar though to match levels before pumping to my travel amp. I could always recreate the famous Gibson Log but with a keyboard in place of half a guitar body.

Turns out, I have 4 battery-powered amps.

Most pedals run off 9v batteries, but the Digitech Whammy has a big’ol wall wart because it needs 18v of power - this can be emulated with back-to-back 9v batteries, but that can run into money - other pedals & the korg itself run off AA batteries, usually also around 9v - so perhaps there’s some powerbank solution that can get me this play time? My portable amp takes 6 C-cell batteries & I’ve already investigated using 12v SLA (sealed-lead-acid) batteries there, no need to create a power regulator since buck converters are cheap, I’d just have to create some sort of break-out board to supply power as-needed. Marine SLA batteries have a larger storage capacity but can cost hundreds of dollars - while others are under $20 and have shorter operating times - running completely off a raspi instead of setting up pedals would be a lot cheaper, and probably enable me to use an Anker powerbank for juice instead - at least those are rechargable - but if there’s buck converters around you can get by with a drill battery, sadly I don’t have a wireless drill (which, if you can’t tell, should tell you I also don’t have a 3d printer - someday I’ll post a pic of my drill somewhere, but it’s older than I am and made by Craftsman)

I just fixed my Digitech RP200 guitar multi-effects - the switches in here are crummy and the “bypass” colors your tone - folks suggest putting these in a separate loop, but I think there’s room in this case to replace the switches with proper foot-operated ones, and provide a

I’ve been playing with the Raspberry Pi in my effects loop (and tape in/out) of my mixer, with an Akai LPD-8 triggers/knobs midi thing and guitar/fx - I need a more complex sound path, like, the effects loop and the output of the PI separated (which can be configured in software) - but - I think I can jam this whole thing into the guitar ALA Bo Diddley 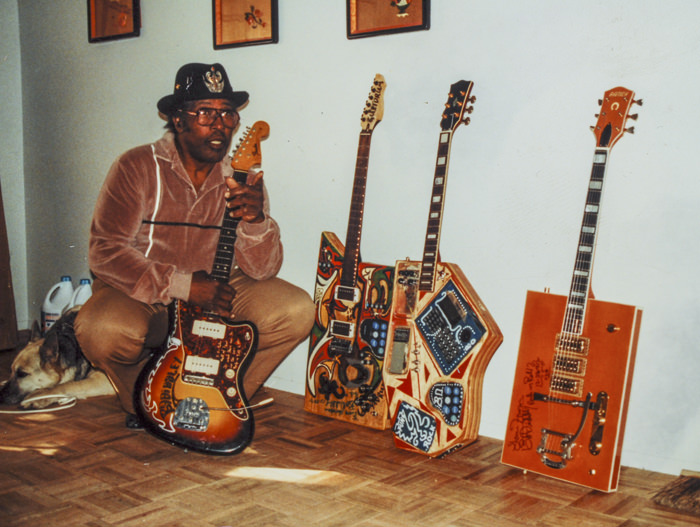 (read more about that on extrachill. maybe get a piano keyboard that’s around the LPD-8’s size, or one of those similar sized products. I could have a guitar with MIDI in that actually triggers the built-in effects and synths and drums in the ras-pi.

True Bypass - but I’m far to lazy right now to try to mod out the alumnum case.

bore only the bottom three holes, and move the third hole to the back

These PVC pipes are only 9-24 inches long, but can perhaps be folded (via 45 degree or U-shaped pipe fittings) to form a more compact one-handed instrument.

I also have like 7/12 of a Blue Man Instrument (did I mention that elsewhere in this doc?), well, I got some adapters for the ends to try using them as a digeridoo while I wait to spec out the rest of the instrument. Somebody made a blue-man instrument out of tiny PVC that he plays by popping his fingers into the tubes, check it out it’s WILD: https://www.youtube.com/watch?v=FDE0JuAlktc.

Oh man, I used to want a Eurorack real bad, before the real world bit me in the butt… SO, I have a bunch of electronics bits and bobs in the garage - including a Hammond 164J24 Transformer that should output power in the general range that euroracks use, but this is a BIG “20V” rated transformer, and IDK what that means… but that’s besides the point. I’m currently being tempted by 1U modules like those by Synsi, but they’re sold out…

Electro-Smith has a “Daisy” DSP microprocessor, like an arduino for sound - but they also have FV-1 breakout boards - both tempting… they have a $300 pedal to swap in and out various Daisy boards, but I’m sure there something to be done for the hobbyists out there. (They’ve also got the Daisy as a eurorack module)

These Lunetta-style CMOS Synths are neat, too… but hotwiring logic chips into something musical (in the traditional sense) doesn’t make sense to me. Essentially it’s a bunch of 74** ICs, people have used “dead bug” wiring to attach them, but adding banana connectors like a “real synth” is popular, too.